My wrist has been attracting an inordinate amount of attention lately.

It’s not because of its gangly shape or shockingly pale color, thank you very much. It’s because of the unusual watch that’s been wrapped around it. 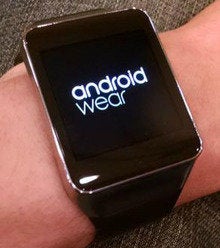 I’m talking about the Moto 360 — Motorola’s first foray into the smartwatch world and easily the most anticipated Android Wear device to date. The newApple Watch may be the talk of the town at the moment, but its Android equivalents have been around since early summer. And now, after months of hyping and teasing, the high profile and high-end 360 is finally on sale for $250 from Motorola, Google Play and Best Buy (if, that is, you can manage to find it in stock).

I’ve been wearing a review unit for a little while now, and boy, have people noticed. From compliments (“Hey, cool watch!”) to questions (“How does that work and where can I get one?”), I’ve grown accustomed to having strangers stare at my arm and strike up conversations.

Part of the reason is that the Moto 360 is, in a word, striking. Unlike the clunky and dorky-looking wrist computers we’ve seen in the smartwatch market so far, the Moto 360 looks like a beautiful timepiece that just happens to do cool things. With its stainless steel body and circular face, it’s as classy and elegant as a watch can be.

There is a caveat, though: It’s big. Not comically so, but enough that it might be a turnoff for some people. I’ve found it to be quite comfortable on my own admittedly narrow wrists — much more so than the awkward rectangular shapes we’ve seen on other Android Wear devices — but your mileage may vary. To some degree, there may also be a gender divide; while I’m certainly no expert on female fashion, several women with whom I’ve spoken have felt the watch was too bulky for their preferences.

Moto 360 on wrist JR Raphael
The Moto 360 is a beautiful timepiece, but big enough that it might be a turnoff for some people.

The Moto 360 comes in a few different styles: You can get it with a silver or dark metal body (the former of which looks significantly better, if you ask me), and you can choose from a light gray or black leather band. Steel bands will also be available later this year; they’ll cost an extra $50 if bought with the watch or $80 if purchased on their own.

The Moto 360 I’ve been wearing has the gray leather band; it’s soft and comfy, if a bit understated in appearance. It’s actually just a regular 22mm strap, so you could theoretically swap it out for a store-bought alternative if you wanted — though Motorola warns that straps not made specifically for the 360 might not look good with its design.

Despite being congenitally clumsy, I haven’t spent much time worrying about the possibility of damaging the Moto 360 while I’ve worn it. The watch doesn’t feel particularly fragile; its screen is protected with Gorilla Glass and its body is water resistant — IP67-rated, which means it can be submerged in up to three feet of water for as long as 30 minutes. While it’s far from bulletproof, the occasional bump or splash shouldn’t do any damage.

So how ’bout that display? At normal viewing distances, the Moto 360’s screen looks quite impressive: Colors are brilliant, text is easy to read and the watch’s auto-brightness feature — a first for Android Wear — ensures that the screen remains optimized for your environment whether you’re in a dark room or direct sunlight.

If you bring the watch close to your face, the relatively low 320 x 290 resolution becomes apparent, but that’s pretty much par for the course with smartwatches these days. A slightly higher resolution would be nice, but with the type of content you typically view on a watch — and the distance from which you normally view it — it really isn’t too much of an issue.

Android Wear, after all, revolves around the notion of glancing. These watches aren’t meant to be full-fledged phone replacements that you stare at for hours; they’re meant to provide brief snippets of contextual information — in the form of notifications and Google Now-style cards — along with the ability to perform voice-controlled functions that take mere moments to complete.

(Wear works with any Android phone running Android 4.3or higher. Beyond that, there are no restrictions or special requirements for the Moto 360 to function.)

Experiencing Wear on a round screen is a little different than on the rectangular devices I’ve tried before. The display area feels more spacious, with elements extending all the way to the sides of the surface instead of appearing in cut-out boxes. The fact that the 360’s face is practically bezel-free also adds to this infinity-pool-like effect.

There are a few quirks, however. First of all, the Moto 360’s display has a thin bar at its bottom that’s blacked out and shows no content. That’s apparently because this area houses the sensors needed for the device’s ambient light sensor. It’s a little jarring at first and the watch would definitely look better without it — but I found I stopped noticing it fairly quickly. It’s certainly a worthwhile tradeoff for the auto-brightness feature it enables.

The screen’s beveled edges also sometimes create a strange light-refracting effect that’s particularly noticeable when a white background is being shown on the display. It’s an odd kind of rainbow-like shimmering that’s mildly distracting and just a bit bizarre.

Those things aside, there’s a lot to like about the Moto 360’s circular setup. As a watch, it looks fantastic — and Motorola’s beautiful face designs do an excellent job of showcasing the traditional round timepiece shape. In an especially cool twist, you can customize any of the face designs by using aspecial companion phone app. It lets you easily adjust elements like background color, accent color and number style to make each design look the way you like.

Speaking of watch faces, the 360’s default setting is for the display to remain off when it isn’t actively being used. The screen then automatically illuminates anytime you touch it, raise your wrist or press the physical button on the side of the device.

If you prefer, you can set the device to remain on and in a dimmed mode while it’s inactive. In that configuration, the screen switches to a scaled-down, black-and-white version of the watch face whenever it’s idle. The 360’s dimmed mode looks quite good — much better than those on some other Android Wear watches, such as the Samsung Gear Live. In addition, when in dimmed mode, the Moto 360 uses sensors to temporarily shut itself off when the watch has been still for several minutes or when your arm is hanging downward (usually an indication that you’re walking).

There’s just one problem: With the dimmed mode enabled, it’s virtually impossible to make it through a full day without the watch dying. So unless you want to top your watch off midway through the afternoon, you’re basically looking at using the 360 in its default state — where the display remains off until you touch or raise it.

In that default state, I’ve found the Moto 360’s battery life to be passable but not exemplary. With moderate to heavy use, I’ve consistently been able to make it through a full day — 14 to 16 hours — with around 15 to 20% of the device’s charge remaining. It’s close enough that you could conceivably run out of juice if you used the watch heavily all throughout the day, but for most people, most of the time, I don’t think it’ll be an issue.

Make no mistake about it, though: You will need to charge the watch every night when you go to bed. Other Wear watches are a bit better than the 360 in terms of stamina, but they’re all essentially good for a single day of use and no more.

On a positive note, the Moto 360 is light-years ahead of the competition when it comes to charging. While other Wear watches use cumbersome and annoying proprietary charging systems, the 360 uses the Qi wireless standard. The included charging dock is a simple soft-touch plastic cradle — and while the watch charges, it displays an attractive dock-like screensaver that shows the current time and battery level. It seems to have been designed with nightstand placement in mind.

The best part about the Moto 360’s wireless charging capability, however, is the fact that the watch will work with any Qi-compatible pad. I’ve tested it on a couple of third-party charging pads as well as an off-brand Qi-enabled battery pack, and it’s worked fine every time. (Motorola tells me there’s no risk of damage with third-party pads but notes that it can’t guarantee they’ll all work as efficiently as the official 360 charger.)

In terms of performance, the Moto 360 is a hair behind other Wear devices: Its animations are occasionally a bit jerky, and it sometimes takes a second or two longer than the LG G or the Samsung Gear Live to recognize a voice command and execute a task. But we’re talking about a fairly subtle distinction; it’s really not something I notice unless I’m comparing two devices side by side and actively looking for differences.

Wear watches in general could stand to be a little speedier in their voice command response time, but that seems to be more of a problem with the platform than with any particular piece of hardware. Similarly, I’ve seen the 360 briefly disconnect from my phone from time to time — but I’ve seen the same thing when using other Android Wear devices, too. The platform itself is still very much a first-generation product.

One area where the 360 outperforms its contemporaries is in the realm of fitness: The watch has both a pedometer and a heart rate sensor, and the latter is particularly advanced. Rather than merely taking your heart rate when you tell it to, as most watch heart rate sensors do, the 360 measures your heart rate automatically in the background at regular intervals throughout the day. That allows it to provide detailed stats about your activity levels along with reminders to help you reach daily and weekly activity goals.

I wouldn’t necessarily rely on the measurements for medical purposes — as with most optical heart sensors I’ve tried, the device’s precision seems to be hit and miss — but the 360 conducts enough readings to give you a good general gauge of your activity, at least, and a relative feeling of how often your heart is pumping fast.

It is worth noting, though, that the Moto 360 feels like more of a dress watch than a sports watch. There’s no reason you couldn’t wear it to work out, but leather and metal bands aren’t exactly ideal for heavy sweating.

And that, I think, is going to be an important distinction as more and more Android Wear watches arrive. We’re going to see a variety of different sizes, shapes and styles — and as with any personal product, no single make or model will ever be right for everyone.

At this point, I’d say that Android Wear watches are best viewed as cool toys for technophiles. Neither the hardware nor the software is quite polished enough to be ready for prime time — and for the bulk of consumers, it’s advisable to wait until the second generation comes around and the technology has had a chance to mature.

Some people, however, don’t want to wait — and if you’re reading this website, there’s a decent chance you’re one of them. If you love gadgets and like the idea of having easy access to information, the Moto 360 provides the best overall experience you can get on a smartwatch today (and for a competitive price, at that — just $50 to $70 more than its lower-quality Wear competitors and a full $100 less than Apple’s upcoming product).

If you have an extra $250 to spend and want a smartwatch now, you’ll be happy to have it adorning your wrist.