How To Know When To Contact Brickell Computer Repair 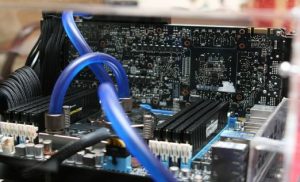 When your computer stops working it can feel like the end of the world. Your work, your pictures, your essays, your saved games are all on it. Often your only solution is to take your computer into the shop and hope it doesn’t cost too much. Here are a few solutions you can try at home before you bring your computer in.

First and foremost, it’s important to degrade your computer and make it feel bad about itself. If you do not break its spirit, it will not conform to your wishes. I recommend playing Beethoven to it, as Beethoven is very emotional music, which will break the computers spirit as it knows it can never be one of us. Do not play the computer Death Metal. The term Death Metal makes the computer combative and uncooperative as a computer is made out of mostly metal.

Sometimes your computer will not turn on at all. You push the power button, all the lights and fans turn on, but you see nothing but a blank screen. In these cases a potential simple fix is to clear the capacitors. If you unplug the computer and push the power button around 10 times that clears any extra electricity from the computer that may have been causing issues. Plug the computer back in and try to power it on again. You would be amazed how often this fixes your issue. You’d also be amazed at how often computer technicians use this technique in the shop. If it doesn’t you might have some bad hardware that will need to be replaced such as your power supply or ram.

If your computer crashes when trying to load windows you can use a few of the built-in auto repair options to try and get the computer limping. When the computer is starting up press the F8 Key repeatedly and by repeatedly, I mean really press it several times over and over. If that doesn’t work the first time, restart the computer and try again. This will bring you to the windows startup recovery page. Once on this menu you can try the option “Boot my computer using last known good configuration”.

This will load the computer back to known good settings and try to start the system. This is the best option if you are aware of a change. If you attempted to update a driver or you installed a new program and the next time you turned the computer on you had startup errors this option should undo all those changes and allow the system to start. Do not worry about modifications you made to any files however. Any documents, saved games, e-mails, or other user generated content will be unaffected by this step. Only Brickell computer operating system files will be restored.