HOW DO I KNOW IF MY LAPTOP HAS A BROKEN SCREEN?

Home » Geek Blog » Blog » HOW DO I KNOW IF MY LAPTOP HAS A BROKEN SCREEN?

One of the main reasons people visit our site is because they have a laptop with a broken screen and it needs to be replaced. Usually, people know what happened to their laptop to cause the screen to break, and other times it’s a mystery. As well a “broken” screen is not always a broken screen as they might think. The most obvious evidence of a broken screen is cracked glass or clear signs of physical damage to your screen, but what if the screen is not working properly or doesn’t display at all, is it broken? 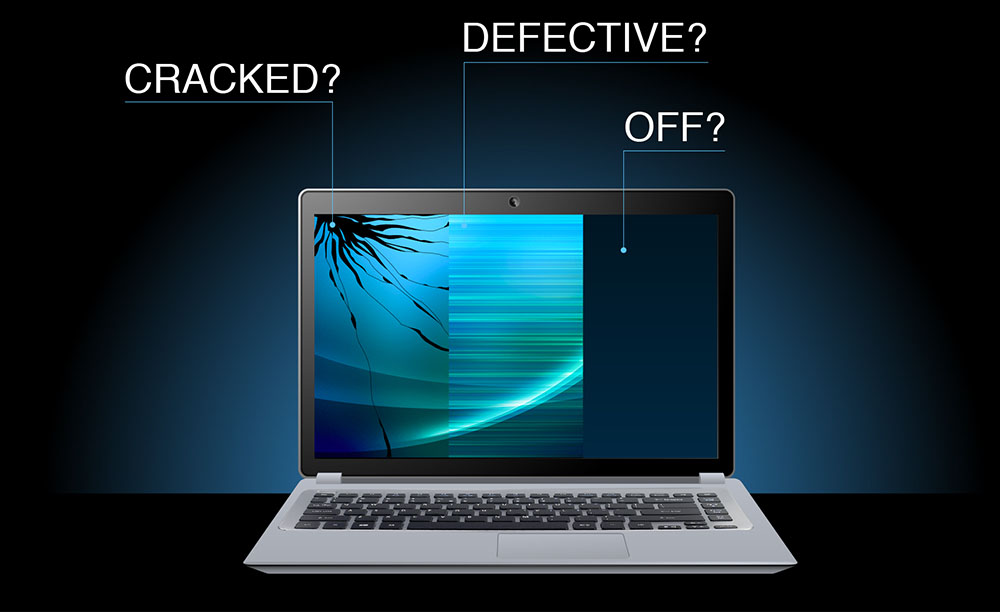 A broken screen should only be referred to as broken when there are signs of physical damage. A screen with physical damage will have broken glass or black splotches on the display, like ink. There have even been times where customers stated that they opened their laptop one day and the screen just appeared this way, so it’s not damaged. However, this is not true. A screen can be damaged if the laptop had an impact on the lid while it was closed or by the simple mistake of opening/closing the lid from one corner.

Older laptops had a locking mechanism that helped enforce you to open the lid from the center, however with today’s laptops manufacturers focus on fashion over function, giving you slimmer sleeker designs which in turn are making these devices more susceptible to accidental damage. Nowadays customers are in the habit of opening and closing their laptops from one corner, but what they don’t realize is that this can cause stress or bend the screen just enough to crack the glass, even if they do it slowly and carefully. The best and the recommended way to open and close a laptop is from the center with one hand while holding the palm rest down with the other hand.

Broken screen – 123PCSolutions will fix for an affordable price

A defective screen is one that is not working properly or not at all, without any clear signs of physical damage to the screen. Some examples can be distorted images or coloring, pixelization, resolution lines, backlight issues or a blank screen. However just because a screen appears to be defective it may not actually be the fault of the LCD panel itself. One simple test most people can do at home is to connect their laptop to an external monitor or display like a T.V. using a VGA or HDMI cable or even wirelessly. If the external display shows the same problem as your laptop’s screen, then your issue is with the laptops hardware, graphics card failure/processor failure, or in some cases software.

However, if the external display is fine and only the laptop has the issues, then we can narrow down the problem to the screen or its video cable. The screen is connected to your motherboard via a multi-lane data cable, this is how the video is received and displayed as images. Should this cable become damaged or loose from the connections this will cause an interruption in the signal and present the aforementioned examples. There is no easy way for most customers to troubleshoot whether they have a screen problem or cable problem, as they will need to have another known working part to test with.