The average price per hour for computer repairs ranges between $120 to $150. For example, a hard drive replacement could take two hours costing roughly $300.

With 123PCSolutions those prices don’t exist in our vocabulary, we have the best prices in town. 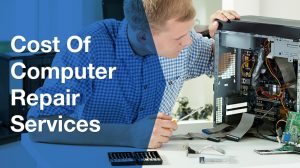 Staring ahead at the computer screen, anxiously awaiting a web page to load, you finally admit maybe there’s a problem with the computer.

The computer is only six months old, so there’s no reason a web page should take 30 seconds to appear. Maybe there’s a problem with the software that’s causing delays.

Then you realize that Adobe update you clicked on a few weeks ago may not have been from Adobe.

Web-based malware is often the culprit for computers running slower than normal. Oftentimes users don’t realize malware is on their Mac or PC until they’re taken to websites they don’t recognize, their search engines change or their computers slow down.

Users can find and fix malware problems on their own, for free. But sometimes users prefer to call computer repair professionals to fix these and other problems.

If you do hire a professional to check your computer’s software, it’s important for them to physically be on-site to check your system.

Service providers can use software to access your computer remotely, without ever setting foot in your home. But because there are multiple forms of malware it’s nearly impossible to provide a one-size-fits-all solution for a slow computer. Technicians should also physically check the computer to make sure there aren’t signs of larger problems, such as a fan that never stops running.

Not all computer problems are software-related. If your computer won’t turn on, chances are you have a hardware problem.

Hard drives are the most common and practical computer parts to replace. The equipment costs between $60 and $100, and the job takes about two hours. Jones says replacing a hard drive is roughly a $300 job.

Before paying for a hardware repair, consider the age of your computer. If you have a six-year-old computer that needs several hundred dollars in new parts it might be time to buy a new one.