How to fix motherboard with failed NVIDIA chip 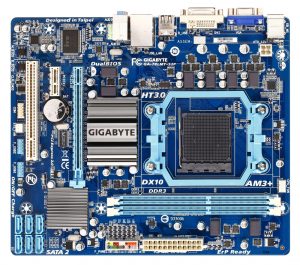 Motherboard Repair – In this post, I explain how you can fix a motherboard with failed NVIDIA graphics chip. This repair might apply to some HP/Compaq laptops and probably some other brands. If this repair works for you, please mention the brand and model number in comments after the post. This will help other readers.

MY UNDERSTANDING OF THE PROBLEM

HOW TO FIX FAILED CHIP – Motherboard

Before I tried baking the motherboard in an oven or use bubble-wrap. But today I’m going to fix it using a heat gun.

Basically, I’m going to heat up the graphics chip with a heat gun to solder it back to the motherboard (reflow). I think this method is more reliable and the repair should last for a while.

HOW I FIXED THE MOTHERBOARD

First of all, you’ll have to disassemble the laptop and remove the motherboard.

In my example, I’m using a motherboard removed from HP Pavilion tx2000.

In most laptops the graphics chip located under the CPU heatsink (and it has NVIDIA logo on it), so there shouldn’t be a problem locating the chip.

In order to figure out how to position the heat gun and for how long, I tested it on a penny with a small piece of solder on the top.

After about 40-45 second the solder started melting. After 50 seconds the solder melted completely.

To protect the motherboard from the heat I used a regular cooking aluminum foil. I cut off a piece of aluminum foil and folded it a few times to make my protection shield thicker. After that I cut off a square opening right in the middle, the same size as the NVIDIA chip.

It’s not necessary to make it perfectly clean. Just make sure there are no large chunks of the grease on the chip.

UPDATE: Some people mentioned that I should have applied some liquid flux underneath the chip for better results. I’ll definitely do it next time when I have to fix another motherboard.

I found this video explaining how to apply liquid flux under the chip. This video was made for Xbox 360 motherboard but should apply to any laptop motherboard too.

After 50 seconds I turned it off and let the motherboard cool down for about 20 minutes.

Don’t forget to apply new thermal grease on the graphics chip when you install the heat sink.
Some laptops use thermal pads instead of grease. If that’s the case with your laptop, make sure the thermal pad positioned correctly.

After I assembled the laptop back together, the video started properly!
The NVIDIA graphics chip problem fixed!
Will it last for a long time? I don’t know. Still testing.