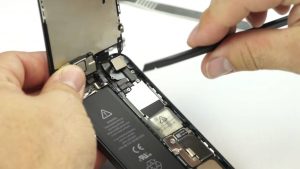 Kendall iPhone repair – There are a lot of problems that can happen with iPhones. Just like any heavy-use tool can fall victim to a wide range of issues. It’s an intricate electronic device with thousands in inner parts that can fail over time and need Kendall iPhone repair. Just think of how much you use it for?

Most people use their phones as communication devices, music players, file storage tools, timers, diet-helpers, reminders, business tools, etc. The list is endless. This is why finding new ways to maintain a healthy smartphone is a top priority on Apple’s plate.

Apple is working on a new idea though. It began with a patent that centers on technology to empower a phone to “fix” itself. While you’re not using the phone, or in a loud environment where you can’t use your phone, it would be able to perform various self-maintaining functions.

Without interrupting service, the iPhone would be able to repair and recalibrate itself. It already has sensors to know when you are near it, or if it’s in an environment that does not allow phone use. It’s these times it would kick into self-maintenance mode. This patent is not only applicable to the iPhone, but it is usable with laptops and tablets.

An example of what this patent can do can be seen when considering water. Who hasn’t gotten their smartphone wet at times? It’s pretty common. Luckily, this isn’t sure-death for a phone, but it can invade the inner shell of the phone and cause problems. With this patent, the phone would sense water and use a special tone to clear it out. It would only emit this unpleasant sound when not in use, or when it’s in a crowded or loud area. Of course this wouldn’t fix a seriously waterlogged phone, but for small issues it definitely would benefit the owner.

Another way the phone could repair itself is for individual pixels. Missing lines and dark pixels are a definite concern with phones, iPhones included. If this happened, the phone’s patented inner working would allow it to 1) sense the deficiency and 2) manage it. This management includes cycling through light patterns and colors over a specific time to fix it. Again- this would be done during “down time” when a user wasn’t at their phone. If they start using it, the process would auto-suspend and resume at a later time.

Its tools like these that are coming in the future that will help iPhone owners. Auto-fixes can make everyone’s lives easier. Unfortunately, it will be a while before this is officially rolled out and available. Until it is, we still need professional Kendall iPhone repair experts to step in and help us. Thankfully they are available. For more information contact 123pcsolutions.com.