Heatsink -Why laptop turns off or freezes? 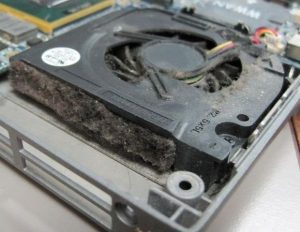 Any laptop has a cooling module which includes two parts: the heat sink and cooling fan. When it works, the processor (CPU) heats up and the heat sing heats up too. At some temperature level, the fan kicks in and cools down the heatsink.

The problem starts when the cooling module collects too much dust inside. The dust kills normal airflow inside the cooling module. Eventually, the processor overheats and the laptop turns off unexpectedly or freezes.

This problem can be fixed by cleaning the cooling module.

Some laptops give you an easy access to the heatsink and fan. In laptops like that you can access the cooling module through the bottom cover.

In some models you can remove the fan without separating the heatsink from the CPU.

After I removed the fan, I found a thick layer of dust inside. Cleaning it up will fix the overheating problem.

Apply thermal paste on the processor.

You should apply new thermal paste before installing the heat sink back in place.

I usually use Shin-Etsu paste which is relatively cheap and performs well.

After applying new paste, install the cooling module back in place. Do not forget to connect the fan cable to the motherboard!

What if the cooling module cannot be removed easily?

In some laptops the cooling module is buried deep inside the case and cannot be easily accessed and removed. In order to remove it you’ll have to disassemble the whole laptop but it’s only for experienced users.

In this case you can use the following technique. It’s not perfect but works very well.