MEMORY RAM: Knowing to detect problems related to it 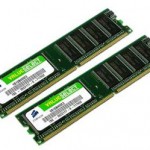 It is very important to know the functioning of the RAM in the PC, as this is part of one of the main components that make up the computer system, so the same problem brings computer failure.

The RAM (Random Access Memory). It is where the computer stores data temporarily, only to be accessed by the processor faster, ie this data is lost when the computer is turned off, only remain those who are been stored on the hard disk.

This physically constituted by a set of integrated chips into modules, which communicate with the main card through the contacts on the bottom has.
By getting more computer memory in our performance of it is improved, applications respond faster, web pages load faster and can have more programs running simultaneously.
Currently, almost all memory comes in the form of memory modules and installed in sockets located on the system motherboard.
Generally the memory is close to the processor as close after finding this information travels faster and therefore its performance is improved.
Its speed is measured in megahertz (MHz), or in terms of access time, measured in nanoseconds.

Most common presenting symptoms to fail:

I hope after reading this article can more easily detect a problem caused by memory.