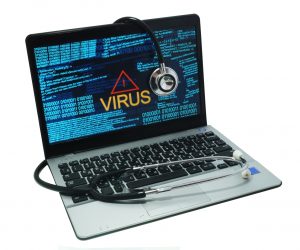 A virus is a computer program written to maliciously affect the way a computer operates by loading itself onto a Computer system file. It  is capable of reproducing itself once it’s on a system to prevent other programs from operating. Viruses can interrupt the execution of programs, delete files, or destroy the contents of your hard drive. Some aren’t designed to do any damage at all but simply annoy – bringing up text, video, and audio messages, marketing banner materials. They typically hug memory that could be used for other programs. This can cause your computer to become unstable and function erratically. Eventually, many viruses may cause your system to crash or malfunction.

A rootkit is a software that enables  administrative access to a computer, while actively hiding its presence from users by hiding in the master boot record. This means monitoring user activity, accessing logs,  executing files, and even changing the computer’s configuration.

Spyware is software that self-installs on a computer,  enabling information to be gathered about your internet use, passwords, credit card information etc. without your knowledge and distributed for malicious use.

Adware is any software package which automatically displays, or downloads advertisements / marketing material to your computer. These can be in the form of tool bars or pop-ups that sit on your desktop or work in conjunction with your web browser specially Internet Explorer. While adware alone is harmless, some adware may come with integrated spyware and other privacy-invasive software.

When a Bot  infect a machine it typically sits quietly as a background application and awaits for instructions. An entire network of machines infected with a particular bot is called a botnet, and the individual computers are often called zombies. Bots generally do not do much on a computer, until the owner of the botnet sends out instructions to the infected machines. The zombie machines can be used to send out email spam messages, or other malicious and illegal activities, such as hacking into a server with sensitive information.

A trojan is a program that appears to be legitimate, but performs some illicit activity when it is run.  It may be used to locate sencitive inf, password information, make the system more vulnerable, or simply destroy programs or data.

Worms are quite similar to viruses in that they are usually spread with the transfer of an infected file.  Worms usually try to spread itself and infect as many computers as promptly as possible. They can take up both memory and network bandwidth and often times destroy files.