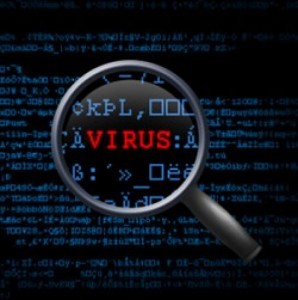 Worldwide systems were buckling after the ‘Sobig.F’ spread to 134 countries in just 96 hours, generating tens of millions of e-mails.

Experts fear it could increase the volume of electronic traffic by a staggering 60per cent, slowing the internet to a crawl.

It is believed to have cost British businesses alone hundreds of millions in lost orders and system crashes. The global cost will be immense.

Individual companies have been bombarded with millions of copies of the virus, while home users have seen their machines “jammed” by up to 6,000.

The PC World chain said tens of thousands of customers had brought in computers to be “cleaned” by technicians. Computer virus

Experts say Sobig appears to have been written by senders of “spam” – unwanted junk e-mail – trying to find ways past internet filters which block their messages.

The new digital onslaught comes hard on the heels of two other major viruses, Blaster and Nachi. “This is the worst barrage of viruses in the history of computing,” said Graham Cluley of Sophos Anti-Virus.

“Even companies who are properly protected are feeling a slowdown.

“Sobig. F is the fastest-spreading virus of all time and if it carries on at this pace for a few more days it will become the most prevalent too.”

MessageLabs, a British-based Internet security firm, said it had intercepted more than a million copies of Sobig.F in 24 hours, more than for any other Computer virus.

One in 17 of all e-mails sent since Monday was infected. By comparison the ‘LoveBug’ Computer virus, which hit the headlines three years ago, was found in one in every 28 e-mails at its height.

Sobig.F spreads when unsuspecting users open attachments in e-mails that contain such headings as “Thank you”, “Re: Details” or “Re: Wicked Screensaver”.

It sends multiple copies of itself to every name in a person’s address book – so each infected machine can spawn hundreds of e-mails.

Sobig.F also tries to implant a background program which turns computers into a relay for any messages sent by the Computer virus’s creators – greatly increasing their earnings.

Experts advise users to keep anti-virus software up to date, never open an e-mail attachment unless they know what it is and delete uninvited e-mail – particularly from an unknown sender.

Mr Cluley said even e-mails which seem to come from friends or colleagues should be treated with caution.

For anyone whose computer has been infected, the advice is to go to the website of an internet security company like Symantec, FSecure, Sophos, Message Labs or McAfee. Fixing programs are also available from Microsoft.

Anyone whose computer has been slowed too much even to get online can buy anti-virus software from 123PCSolutions.com or get their machine fixed there.