How long until Microsoft support for Windows 7 ends?

Windows 7 ends – Find out how much longer Windows 7 is safe to run on your PC.

Windows 7 was one of Microsoft’s best-loved computing operating systems and most of us are still using it.

According to NetMarketShare’s September 2018 data, 40.88% are still using Windows 7 – compared to the 37.44% who have moved on to the latest operating system, Windows 10.

But like all operating systems before it, Windows 7 will eventually reach the end of its lifecycle, making an upgrade an absolutely essential task for the safety of your PC.

When does support for Windows 7 end? 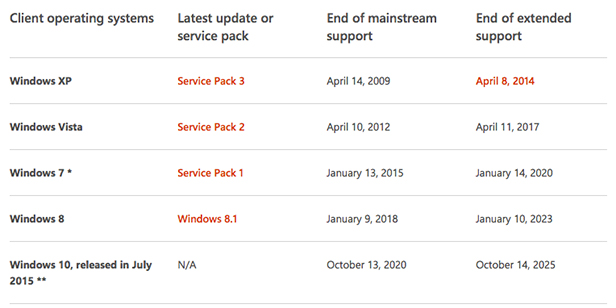 Is Windows 7 still safe to use?

Once an operating system enters extended support, it’s still very safe to use. It means that Microsoft will continue to patch any security threats but won’t add any new features (as it would do during the ‘mainstream support’ phase).

On January 14, 2020, the same will be true for Windows 7. Even if people discover huge security holes that affect Windows 7, Microsoft won’t issue you security updates. You’re on your own.

Sure, you can run antivirus tools and other security software to try protecting yourself, but antivirus is never perfect. Running software with the latest security updates is important, too. Antivirus is just one layer of defense. And even security programs will gradually drop support for older versions of Windows.

Windows 7 ends – Microsoft will keep making security updates for Windows 7, even though you can’t get them. Large organizations can sign “custom support” contracts to keep getting security updates for a period while they transition to a new operating system. Microsoft ratchets up the price going forward to encourage those organizations actually to move to a new version of Windows. The same thing happened with Windows XP.